There is a high percentages of tooth decay in baby teeth in developed countries, a rate of 20.5% in children ages 2-5 in the US.

Secondhand smoke may directly affect teeth and microorganisms in a number of ways, including inflammation of the oral membrane, damage to the salivary gland function and a decrease in serum vitamin C levels, as well as immune dysfunction. Although it has not been scientifically proven, this would suggest that reducing secondhand smoke among children could help prevent cavities. 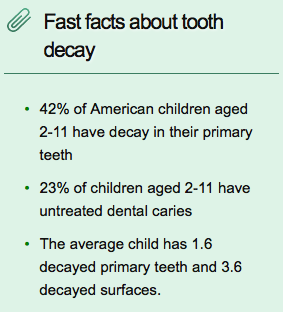 A team of researchers based in Japan set out to investigate smoking during pregnancy and exposure to household smoke in infants at 4 months of age as risk factors for caries in deciduous teeth.

They wanted to know whether maternal smoking during pregnancy and exposure of infants to tobacco smoke at the age of 4 months would increase the risk of caries in deciduous teeth.

Mothers completed questionnaires to provide information about secondhand smoke exposure from pregnancy to 3 years of age and other lifestyle factors, such as dietary habits and oral care.

Incidence of caries in deciduous teeth was defined as at least one decayed, missing or filled tooth assessed by qualified dentists.

High risk of cavities in children of parents who smoke

Compared with having no smokers in the family, exposure to tobacco smoke at 4 months of age was associated with an approximately twofold increase in the risk of cavities. The effect of maternal smoking during pregnancy was not statistically significant.

This entry was posted in Industry News, Info Articles. Bookmark the permalink.